Last weekend, my daughter and son-in-law held their annual/sometimes semi-annual garage sale. Several of us participate, friends and family alike, and at some point alcohol gets involved. We can never predict what will sell, and we’re pretty laid back (some might say lousy) hagglers. But we always have a good time, rain or shine, and never fail to meet the most interesting people.

Carlene and Ben live a 90- to 100-minute drive from me. For this sale, in addition to the usual garage sale stuff I’d packed in boxes, I had a porcelain stove and display tables to haul. I’m…meh…OK/comfortable driving Jim’s pickup on a good day, but the stove took up the back window, and I had to rely on the side mirrors to see around me, so I was a little nervous. Thank goodness I had on my big girl panties that day. It rained almost the entire trip, sometimes so hard I couldn’t see the end of the hood. It took two hours and change, but I got to their house, and in the end, it was worth the work and white knuckles for the experience.

I talked to a woman who’d recently lost her mother and bought a lion necklace in her memory, and a little boy who bought a scooter because his mother said he refused to ride a bike. A guy (wearing a political hat representing a person I oppose with all my being) and his wife stopped by, and when she spotted the jewelry, he didn’t once say an unkind word to her (not that I anticipated he would, just to be clear) about her taking 45 minutes to go through the unsorted costume jewelry. He just seemed happy that the sun was out, like we all were. He even brought her back the next day. Lesson learned: garage sales can bring people of opposing views together if both parties are willing to rise above the rift and difference. There was also the guy who my son-in-law is convinced was flirting with me as he bought my Moody Blues and Elton John CDs, but I think he was just enthusiastic about music and talking about JBL (or was it JVC?) speakers.

God knows the proceeds of a garage sale won’t make any of us rich. This weekend I netted about $50, $10 of which went to pay for a tuna sub on Friday and a calzone on Saturday. The rest I spent on the way home at the gas pump and at Willy’s Smokehouse in Harrisville, PA (population: not too many), home of the most amazing smoked salmon and, I’m told, ham salad. The salmon was my splurge from the booty; the ham salad was Jim’s.

I love smoked salmon, but it’s spendy. I’m not much into the thinly sliced stuff you get in a flat package that you pay $10 for 4 ounces for at the meat counter (although in a pinch…lox and bagels…). I prefer a filet-o-fish, one that looks like this: 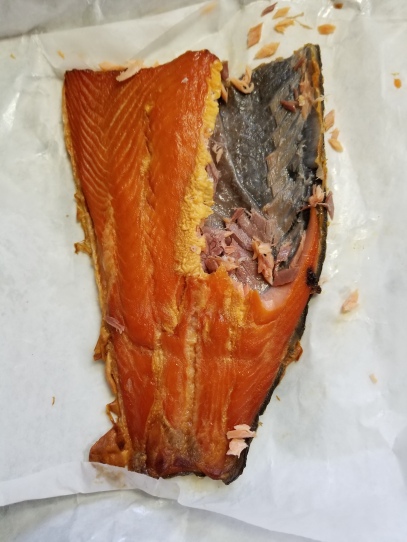 I forgot to take a photo before I dug into it for breakfast yesterday, but you get the idea.

I had in mind two specific purposes for this lovely filet: smoked salmon on an English muffin with a dippy egg (yesterday’s breakfast), and this no-fail, amazing recipe for quesadillas: 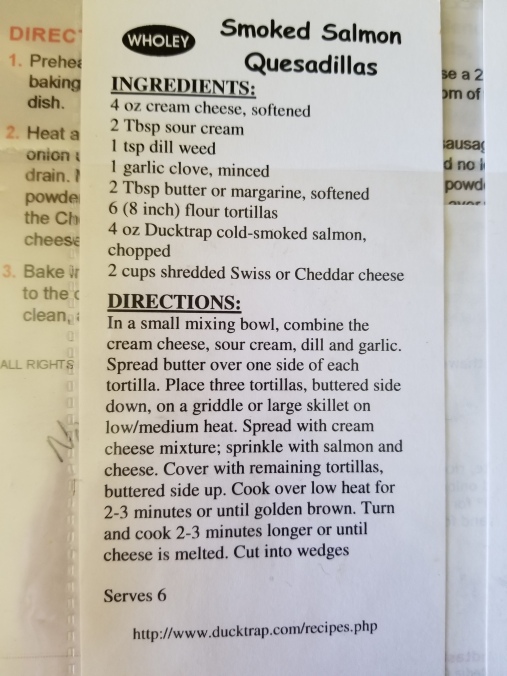 Even though the recipe comes from one of the companies that sells the thinly sliced stuff you find at the meat counter, I can attest that it is best with the kind of smoked salmon you flake off a filet.

I’ve mentioned before on this blog about how tight $$ is (see Sometimes We’re Our Own Guardian Angels). And it still is, like it is for many millions of us sometimes or all the time. The $50-minus-gas profit would have paid for some groceries, part of the phone or electric bill, or more petro. And that’s what makes this salmon so special. For me it was like splurging on a pack of fancy-ish underwear or a pair of flip-flops. When you have an extra $20…money can buy a little happiness, even if it’s fleeting.

I will garage sale for salmon (and ham salad because I love Jim). The next sale is in August. If you’re in the area, stop by. We’ll get you a lawn chair and a plastic cup of something, and you can watch and talk to people with us. Bring something to sell. You just might make enough to buy a little something for yourself.

Eliza Maxwell
Life As We Know It

The adventures of two culinary explorers adrift on the high-seas of our great city, London, in search of an edible El Dorado.

Trying to live a fit life loving food, cycling, gardening and everything in between!