I’m at “that age” when you wake up in the middle of the
night, drenched in sweat, wondering if that pallet of overnight Always you
bought will hold you through next Thursday.

They say you go through menopause like your mother, and if
that’s true, then I will should be locked in my bedroom smoking cigarettes and watching
“Cagney and Lacey” with the windows wide open, even in the middle of winter. My
father damn near froze to death every night, and if he dared complain, my
mother would hiss, “Then turn up the electric blanket.” No, I’m definitely
going through menopause differently than my mother.

The mother of all periods started three weeks ago. A pad or
two a day the first week; a pad or two an hour the second. I planned my days by
how quickly I could get to a bathroom. At the start of week three, the bleeding
tapered, but my body was so confused that it nearly collapsed in a soccer field
bathroom in Indiana, Pennsylvania, last Saturday afternoon.

Everything was fine when C and I left my house at noon. I
plugged in the address to the field into my new GPS (best birthday gift ever)
and away we drove west on 422. A half hour later, I developed a headache and my
joints started to hurt. Twenty minutes later, I couldn’t hold up my head. We
got to the field and parked the car near the rest rooms, just as the chills
started. C covered me with a jean jacket and two bath towels and asked if I
wanted to go find a doctor. I assured him I’d be fine laying in the car with my
eyes closed. Worried, he went to the field.

A few minutes later, I had to use the bathroom. As soon as I
stood up, I saw silver floaters in my field of vision, the ones that clue you
in to an inevitable pass-out. I walked, bent over, to the bathroom, and was
stopped from planting my face on the pavement by one of C’s teammates. “Get C***,”
was all I could say. He poured me in the car and ran down to the field.

Meanwhile, other teammates drove into the parking lot. They
saw me sitting on the passenger’s seat with my head between my knees and asked
what was wrong. I had no idea what the hell was happening to me. All I wanted
to do was pass out. Drift away. Anything to get the damn headache out of my head.
Realistic me knew I needed medical attention, so I managed to say it out loud. One
of the guys grabbed my GPS and found directions to the nearest hospital just as
C was running back from the field. A man from the other team saw the commotion
and stopped to ask if he could help. Being the good Minnesota Lutheran
Norwegian I am, I said, “Oh, no, we’ll be OK.” He insisted we follow him to the
hospital. He knew a shortcut. C, who isn’t a Minnesota Lutheran Norwegian,
said, “Thanks, man. I’ll follow you!”

Now, I understand mistakes happen, even in a hospital. But
two mistakes led to a three-day hunt for what was “really” wrong with me. The CT
scan was fine, the ECG was great, but the initial blood and urine analysis
indicated I had a kidney infection and that my “immune system was compromised.”
High on Dilaudid, Ativan and anti-nausea drugs, I didn’t realize the doctor was
saying he suspected I had leukemia. The lab concluded my white blood cell count
was 1.3 (normal is 4.3 and above), yet the week before, after my yearly
checkup, my white blood cell count was 5.1.

“How does someone develop leukemia
in a week?” C asked.

That’s just it. They don’t. But doctors being doctors (or
doctors being sure they don’t get sued), I was transported by ambulance to a
hospital in Pittsburgh and admitted to their oncology floor. Twenty four vials
of blood later, doctors concluded my white blood cell count was normal, as was
everything else. I didn’t have a kidney infection or an infection of any kind. But
did they let me go 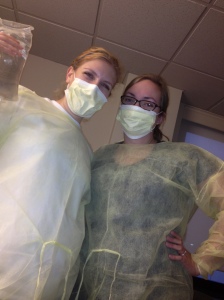 My daughters, all gowned up.

home? No. They had to find a reason I’d almost passed out,
even though both C and I explained to them, ad nauseum, that it was probably
due to bleeding for three weeks and the fact that I felt a cold coming on. Yes,
yes, they said, both were possibilities, but they wanted to be sure.

The overkill continued that evening when I asked if I could
have a couple of Advil for my headache. The doctor prescribed oxycodone. *eyeroll*

On Sunday, the attending physician ordered an echocardiogram
because she heard my heart murmur. The same murmur I’ve known about – and has
not bothered me – all my life. Most medical professionals can’t even detect it.
I had the echocardiogram and…gee…turns out I have a very healthy heart. So did
they let me go home? No.

Sunday night, I again asked for Advil. Again they brought me
oxycodone. *sigh*

Monday rolled around and the attending physician said she wanted
me to consult with a cardiologist, “just to make sure.” She said she could
probably get one to see me that evening. I told her no, I wasn’t staying in the
hospital, and asked her to release me. (This was said through a veil of tears.
I was tired and bored and fed up with being poked and prodded.) She said no. I
said that I was going to leave anyway, and she said I could, but my insurance
wouldn’t cover anything if I left without her permission. Thank god her
assistant was watching all this because when they left my room, I could hear
her pleading my case with the doctor. A few minutes later, the assistant came
in and told me to hold tight, she’d have my release papers ready by 12:30. I
almost kissed her I was so happy.

Thousands of dollars later, the duck really was a duck. I wish
my experience was unique, that the fundamental lack of communication and common
sense on display last weekend was a fluke, but I doubt it. In our lawsuit happy
world, doctors have their hands tied. And because of two separate false
positives, my insurance company is being billed for dozens of unnecessary tests
and procedures, thus contributing to the overall increased cost of healthcare.

That’s the true headache, and Advil and oxycodone can’t fix
it.

My Tweets
Follow Zen Bag Lady (and home of the former Lynn's Weigh blog) on WordPress.com

Type in a key word to find past posts

Blogs of Years Past (including Lynn’s Weigh)

A Writer of History