When I grow up, I want to be as kind as my grandson, Luca. (“Sure!” is his standard response to questions.)

As happy as my granddaughter, Maelie (who, despite cutting what seems like 40 teeth at the same time, still puts on a happy face). 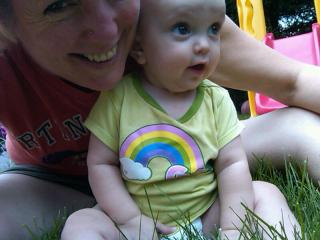 And as unaffected by what others think as my granddaughter, Claire. She wore her Captain America costume to the park yesterday, which drew some looks from adults and children, but she could have cared less.

I want to live by the quote I heard today from Tara Brach’s dharma talk, “Learning to Respond, Not React.” This isn’t verbatim, but the gist is this: Can I sit long enough in a moment/feeling to let the mud in the river settle?
“Buddhist teachers compare calming the mind to letting muddy water settle in a glass. The water goes clear in its own time and there’s nothing you can do to hurry it up. In fact, if you try to hurry it, you’ll only stir up the mud.” From Buddhismand Gardens
It’s hard sometimes to see the forest for the trees, only because I don’t see my life as a forest, just as I forget that I function better when I swim in clear water as opposed to the muddy mess I create when I kick up sediment from the bottom of the river of my everyday life.
The following is going to seem a bit disjointed, but bear with me. I promise to bring it all together at the end.

I remember when I first contemplated a career in nutrition. I was with Joy Bauer in the Today Show green room (seriously, I’m not making this up OR bragging…this is really where it started). My then-husband, Larry, a biochemist, was talking to her about her education. Joy has a bachelor’s degree in kinesiological sciences and a master of science in nutrition. She’s studied a lot of chemistry. She and Larry had a LOT to talk about.

Being an English major (read: a right brainer), I knew I was in for a challenge. The only science I had to complete my BA was human biology, which turned out to be the most challenging class of my college career. I got a B, even though I was on the cusp of a C. Why? Because I have a difficult time with absolutes and memorization.
I’ve always challenged absolutes. I’ve always been able to defend – in a liberal arts kind of way – why I believed 1+1=3. Math and science, however, are unyeilding. They don’t bend for some awesome new insight into Nathaniel Hawthorne’s “Young Goodman Brown.” Carbs are carbs, lipids are lipids, amino acids are amino acids. Hormones and enzymes do what they do. Mutation is often a precursor to disease. How could I retain all that in my right-brain head?
Yet here I am, a few years later, in school again, taking two nutrition classes, a foods lab, and a class about what the dietary field is about.
To get to this place, I had to let the mud settle.
I’m on day four of my no-wheat challenge. I’m feeling…eh…better. The first few days were rough. I couldn’t stop thinking about bread and chips and every other wheaty-thing I’ve consumed since I grew teeth. Is it withdrawal, as Dr. Davis said might happen in “Wheat Belly,” or is it a placebo-type effect? There’s definitely less fluid in my joints, and I wake up feeling “thin” in my stomach, as I used to a few years ago. But is it due to no wheat? Or am I riding a wave of menopausal denial?
The mud’s still settling on this.
Here’s something you are NOT going to like. I hate it. I hate that I did this. And I’ll rectify it, but I need to say it here: I stiffed a server last night. Why? Because – first reaction – I was mad.
I took Luca and Claire to Bob Evans for their favorite ice cream sundaes. They were all kinds of energetic and I was tired and the server was clearly not in a good mood from the moment she said hello. That doesn’t excuse my choices. I’m just laying out the scenario.
Fast forward 20 minutes after the sundaes and hadn’t seen our server, I decided we’d go to the cashier to get our tab. The kids were still behaving well, although understandably they were a little restless. (“Up, Grammy!” “When can we go home?” Things like that. Nothing loud, nothing intrusive. Just a lot of child energy surrounding the Grammy nucleus.)
I asked the cashier…three times…to ask our server for our tab. Ten minutes later, the manager handed me a receipt and simply said, “Here you go,” to which I responded, “That took a LOT longer than it should have.” He looked at me like my head was screwed on backwards. I rolled my eyes, gave the cashier my debit card, signed the receipt without adding a tip, and walked out feeling all kinds of justified.
The mud was stirred up.
I dropped off the kids at their home. I complained to my daughter and son-in-law. Then I sat in the emotion of the experience as I drove down Route 28. What was really going on? Surely some server’s lack of attention wasn’t causing the anxiety and restlessness I was feeling, although it was easy to blame that. I didn’t give it much thought again (still feeling justified) until I woke up this morning and listened to the Tara Brach talk on responding and not reacting.
Clearly there are other things at work here. There are more trees in my forest than I realized. But seeing myself for the challenged, confused, and driven individual I am no longer scares me. My feet have the power to stir up mud. They can also acquiesce and float or tread water as I wait for the mud to settle.

Right now, I’m floating. No doubt my feet will stir up the mud again sometime this week. It’s what we do. We stir and settle, but maybe not settle as much as we should.