I stopped riding roller coasters 20 years ago. Pretty sure I’m not getting on a Ferris wheel again, either. I ride my bike safely, I hike safely. I don’t take many chances.

But when a friend asked me to go motorcycle shopping with him last week, I felt the same feeling I had when I was a teenager riding in my friend Pam’s mustang on a hot summer day listening to AC/DC and smoking Virginia Slim Light Menthol 100s. A feeling that can only be described as badass.

According to Urban Dictionary, badass is: “The epitome of the American male. He radiates confidence in everything he does, whether it’s ordering a drink, buying a set of wheels, or dealing with women. He’s slow to anger, brutally efficient when fighting back.


“The badass carves his own path. He wears, drives, drinks, watches, and listens to what he chooses, when he chooses, where he chooses, uninfluenced by fads or advertising campaigns. Badass style is understated but instantly recognizable. Like a chopped Harley or a good pair of sunglasses: simple, direct, and functional.”

Of course I’m not male, but that James Dean feeling of cool is definitely what I felt at Gatto’s, an awesome multi-building motorcycle and bike shop that I feel like such a nerd driving past because I’m so not cool that way. 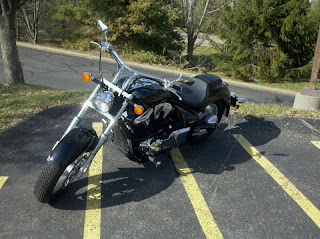 Mark sat on some bikes and asked me to hop on the back to offer my opinion of the seat, not thinking I’d ever have the guts to actually ride on the dang thing. But sitting there, with my feet on the pedals and my arms around his waist, I felt badass, and still did when he bought a bike (the one on the right) and I carried the extra helmet to my car to bring to his house.

Driving away from Gatto’s, the badass feeling quickly faded and I was just me again, taking Claire to Taekwondo and getting ready for my trip to Minnesota.

I went to see Mark on my way home from the airport Sunday. I helped him put up a yard tent and we talked about my trip, all the mundane things friends do. Then he said, “Let’s go get some tea.” He’s been urging me to try the chai tea latte at Panera for weeks, so I said, “Sure. Let me get my keys.” His daughter had his car.

But Mark was headed to the garage. Oh no! I thought. He smiled and handed me the extra helmet, the one I felt so badass carrying out of the dealership. Like a line out of one of my favorite Blue Rodeo songs, I thought, “I want to know where my confidence went. One day it all disappeared.”

I was most worried about my body, that I wasn’t strong enough to hold on. I didn’t trust that these last six years of weight loss and strength training and getting to know my body like I’d never done before were enough to give me the self-confidence I needed to get on that bike.

But something inside me said go. Get over your fear and trust Mark and trust yourself.

I put on the helmet and Mark tightened the strap. Another deep breath and I got on.

What the heck does that mean? I thought. But I didn’t want to sound stupid.

“We’ll take it easy, I promise” he said.

At first, I kept trying to sit up straight, exactly what Mark told me NOT to do. But I knew I had to trust him (and myself), and eventually I moved with the curves, relaxed my vice grip on his waist, and let myself feel the wind and see everything unfettered by windows. It was one of the most freeing experiences in my life.

Now if I can just take that experience into my everyday non-badass life.

The mental and physical aspects of weight loss aren’t always in balance for me. Sometimes what I tell myself I can do in my head, I really can’t do physically. While it’s a blow sometimes, I learn to accept it. It’s when my body tells me I can do something or that I look a certain way and my mind says I can’t or I don’t, that my badass self either flees or burgeons. In the case of the motorcycle, it burgeoned. However, as my friend Shelley at My Journey To Fit said today in her blog, the way we let our minds view our bodies is often the crux of our problem.

“It amazes me to see how exercise makes me feel so positive about my body. The other day, in the span of a few hours, I went from hyper-focusing on my heavy jiggly thighs (in jeans), to looking down at them (in shorts) as I was doing my 4 mile walk and admiring the muscles in my quads.

“How they went from thighs to quads – same body part – is nothing short of a mental miracle for me. And why those same heavy thighs became muscular quads when I was doing something active really shows me how I approach my body.

“I wish I would, all the time, view it with the healthy vibe that I get from exercise.”

The emotional and physical rush I got from riding that motorcycle is similar to the rush I get when I hike a difficult trail. Like my grandson Luca says when he catches a ball, “I did it! I did it!” That’s badass. Knowing without knowing beforehand that you can do something simply by trying and trusting you can is, as Shelley said, nothing short of a mental miracle.

I’m not sure I’ll ride a roller coaster again, and I won’t throw caution to the wind in every situation, but I’ll definitely give my body a bigger say in what it can and can’t do. After all, my mind doesn’t know everything.

6 thoughts on “A Mental Miracle”