I’m getting ready to go to Minnesota tomorrow where my family is gathering to celebrate my dad’s 80th birthday. I was going through old photos for my part of the PowerPoint presentation we’re making for my Dad and while looking at photos of me in puberty, I thought about how weight began to shape me.

When I was 11, I became aware of the social implications of being considered “big.” Formerly kind, carefree kids in my school turned into tyrants, berating the boy who’s stomach spilled over his belt or the girl who couldn’t climb the rope in gym class, like a larger kid’s weight was an impediment to a thin kid’s happiness.

I questioned how my own body fit into these societal rules during the first weigh-in of sixth grade. Remember those public weigh-ins where you’d stand in line in front of the nurse and her scale, getting weighed in turn? When I stepped on the scale, the nurse moved the big metal weight from 50 to 100. It made a loud “cachunk” sound when it settled in the groove, announcing to everyone in the hallway, “Lynn’s gone over 100!”

I was confused since the girl who weighed ahead of me didn’t need the 100 pound weight, and to me we looked like the same size. Realistically, there were probably only a few pounds separating us, but 100 was worlds apart from 99. Adding a third number to my weight wasn’t like adding a second digit to my age. Getting older was still OK. Getting bigger, not so much anymore. And while I was the same person I was five minutes before I got on the scale, I felt more conspicuous, like people would look at me differently now that I’d passed that monumental weight marker.

I looked at the girl next in line. She was clearly smaller and the nurse would have to move the big weight back to 50. I wondered if she’d say anything, whisper my weight to my friends during recess. I looked around at a few girls I thought were bigger than me and wondered, What if I weigh more than they do?

The rest of the year I paid close attention to how our playground culture defined people of all body sizes. No one was immune from the recess body gossip. Not the lunch ladies, teachers, or even other kids’ parents. I left sixth grade afraid of becoming a “big girl,” but there was little I could do to stop it before seventh grade.

It was a rough summer between sixth and seventh grade. Changes popped out of nowhere. I felt lopsided with a 33-inch inseam and squat, pudgy belly. I had no breasts to speak of, but I wore a bra anyway.

I assumed I’d grow up to look like my sister Debbie – a tall, thin pom-pom girl with right-sized hips and proportionate thighs. Instead, I inherited the long limbs, short torso, flat butt genes from my dad’s side of the family. I loved my relatives, but I didn’t want to look like Aunt Ragna.

The day of my seventh-grade physical, I stood shivering on the scale dressed in a t-shirt and waist-high white underwear. My mom sat in a chair while our family doctor stared at my chart over his wire-rim glasses. He tapped it slowly with his pen and looked grave. I expected him to say I had two weeks to live.

“Watch her weight,” he said instead.

This started me on a life-long yo-yo spiral of weight. Here’s a chart of my weight in adulthood. Looks like the Rocky Mountains. 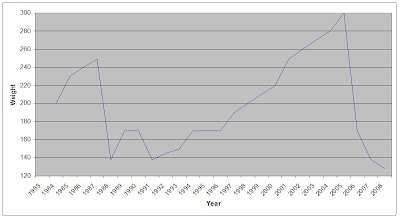 This was me in 6th grade when I started worrying I was fat. 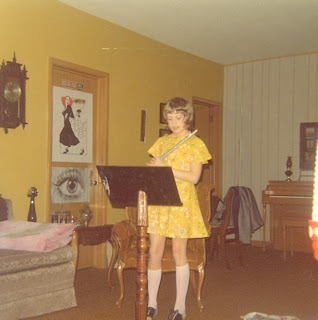 This was taken on my 16th birthday. I was waist deep in self-consciousness by then. 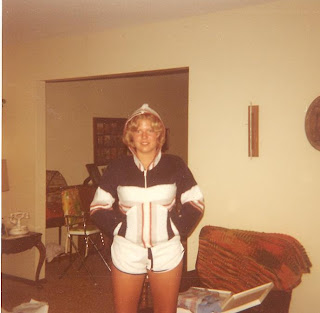 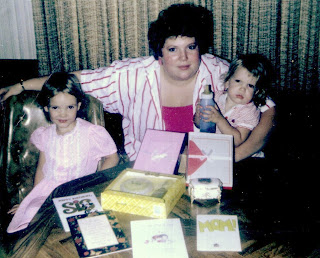 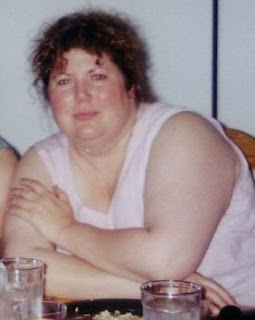 We walk a thin line talking about weight with children, particularly girls. Clearly I was not obese in 7th grade, but my weight was rightly a concern to my doctor. I just wish he and subsequently other adults in my life had had more adequate communication tools to relay their concern without shaming me. It was that uncertainty, that feeling of inadequacy that made me feel fat, ugly and not good enough when I weighed 150 pounds when I graduated from high school.

It’s taken me a long time to deal with some of the pain weight has caused me all my life, pain that for the most part was self-inflicted. It’s a journey I’m still on; this journey to full acceptance of myself at any weight. But it’s worth every step. Worth looking at every photo.

I’ll ask you the same question I asked on Facebook: When did you start thinking of your body as large/fat/unacceptable and how has that perception changed (or not) over the years?

20 thoughts on “All The Weights Of My Life”