Thank you to all of you who posted comments and sent emails of condolence regarding the death of my mother-in-law. They were much appreciated, and they bolstered my strength as I struggled with my three fears of this Houston trip: flying, funerals and food (as in too much or not the right kind).

I’ll start with food because it was the easiest dragon to slay.

Amongst the French bread, pate, salmon, shrimp, and wild boar (that would be my husband who ordered that) at the French restaurant brother-in-law David took us to Saturday, was a lovely salad with thick slices of Beefsteak tomatoes and a fabulous vinaigrette. I had a few slices of whole grain bread with raisins and two bites of Larry’s strawberries and cream dessert and went home feeling neither guilty, full or unsatisfied.

Folks in Texas like their beef, at least my husband’s family does, but I only had to explain my vegetarianism a few times. David bought grapes, bananas, melons, lettuce and tomatoes in anticipation of my arrival, and at the luncheon after the funeral, brother-in-law Bob made sure there was plenty of “real greens” salad (no iceberg) – plain, not swimming in Italian dressing. It helped, too, that David lives two miles from a Whole Foods Market.

I went for a 30-minute power walk around David’s neighborhood on Sunday morning while it was still only very warm and humid and not Africa hot and so humid you need gills to breathe. I finished my workout with some strength training and ab work in his laundry room. It lessened my anxiety for when I had to confront my next fear: funerals.

It’s understandable that after my husband’s funeral 26 years ago (when I was just 19 years old) that funerals would make me sad beyond the grief over the loss of the person who had died. But early on it got to the point where the smell of carnations – any carnations, anywhere – made me sick to my stomach and I associated the smell of churches with death. (Have you ever noticed every church, like all grade schools, smell the same?)

Anyway, I tried to avoid funerals, attending only the really important ones and usually sitting in the back or, if I had to sit up front with my family, sitting near the aisle in case I needed a quick exit if the odor from the gazillion sprays of carnations wafted in my direction. It was when I was asked to give the eulogy at my grandmother’s funeral that my fear of funerals peaked. But with the help of my Aunt Shirl, who held my hand through the viewing (I’m not a fan of looking at dead people, either) and who instructed me to look at her when I felt nervous during my speech, I made it through without passing out.

Since then, I consider each funeral a learning opportunity, breaking it down by 1) reminding myself that it’s not my husband’s funeral redux, 2) it’s not about me, 3) my role is to support my friends and/or family, 4) it’s not about me (yes, I have to do that a few times), and 5) (the big one) death is inevitable…which leads me to flying.

I hate to fly. Wait. That’s not true. I love to fly, especially on a clear night in an Embraer jet and I have the single seat and I can turn off the light and look at the stars and the city lights. I feel like I’m flying through a Christmas tree. No, it’s not the flying part I hate. It’s the bumping around, or more specifically, the anticipation of possibly bumping around. So it’s more accurate to say I hate turbulence. My sister once told me that turbulence was simply road bumps in the sky, which was a nice try, but to me, every bump feels like a poke from the Grim Reaper’s sickle.

It takes a great deal of positive self-talk, meditation and “come to Jesus” moments for me to get in the proper mindset to fly. It’s always worth it, though. Especially this time. If I’d let my fear of turbulence keep me away from Houston, I’d have missed one of the most surprising moments of the Bering family history.

As we sat on the runway on the way home yesterday, I asked my husband, “What was your favorite part of the weekend?”

“Pat,” he said before I finished my sentence. “Definitely Pat.”

Pat is Larry’s brother who, after a 10-year hiatus, came to his mother’s wake Sunday.

We were all – Larry’s three other brothers, two sisters, and assorted nieces, nephews and significant others – inside the Eastman Funeral Home chapel prior to the wake, chatting about how beautiful Mom looked in her lovely peach dress patterned with small white flowers. Her hands were wrapped around her rosary and a photo of her 5-day-old great-granddaughter, and she had slight smile on her face, an almost Mona Lisa-esque look of relief and peace.

The mortician came in and asked Larry if he could spare a moment to take care of some last minute business. I was sitting in the third pew near the aisle (but not, this time, because of the carnations). Larry had only been gone a minute when I heard him come back in the chapel, sobbing. Larry doesn’t cry easily, so either the funeral director handed him a really big bill or he’d seen a ghost. I turned around just as he said, “Look who’s here.” And there he was: Patrick, the prodigal brother.

Very few things in my life have taken my breath away and I’m rarely surprised. When I gave birth or watched the birth of my granddaughter, it was no surprise. I knew they were coming. Joyous, yes. Surprising, no.

But seeing Pat’s smiling face and the tears in his eyes and his ears flushed from uncertainty as to how his family would receive him, I lost my breath. It flat out left my body. I began shaking and sobbing, sans tears, as I hugged his 6’1” frame.

“I’m so glad you’re here,” I whispered in his ear.

One by one, everyone in the room greeted him as Lil laid in her casket, smiling. I have no doubt she had something to do with this.

We’d all debated several times throughout the weekend whether Pat would show up. Some held out hope, some firmly believed that no, he wouldn’t. I can’t speak for the family, but I wonder if we didn’t all, somewhere in the back of all our minds, hope he’d come to Houston. The Berings are an incredibly fluid, bending, and forgiving family. They proved their heritage that night and the next day at the funeral and the day spent at Bob’s afterwards.

(In the photo: Pat, LouAnne, David, Carol, Larry and Bob)

I flew through turbulence both ways to see the Berings and they “rewarded” my courage by not giving a damn what I ate, plus they helped me navigate another funeral. What a family. What a weekend.

(And Patrick, if you’re reading this, please don’t leave us again, OK? ‘Cause I’ll fly out there and haul you back to the family if I have to. I’ll even eat airplane food if necessary. That’s how much the Berings mean to me. Love does that.) 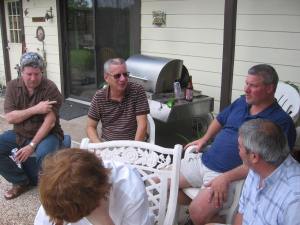 Larry and his brothers 🙂

Uncle Pat with some of his nieces and nephews (well, one nephew in the photo…there are others)

My Tweets
Follow Zen Bag Lady (and home of the former Lynn's Weigh blog) on WordPress.com

Type in a key word to find past posts

Blogs of Years Past (including Lynn’s Weigh)

A Writer of History